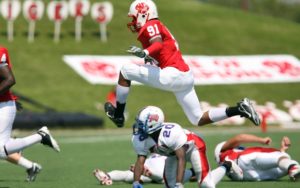 With the start of the NFL season approaching, we can expect another fascinating year of high drama and extraordinary performances as the Los Angeles Rams attempt to defend their Super Bowl title. A slew of capable competitors and the Smartest NFL Players will challenge them.

When thinking about intelligence and sports, the term “dumb jock” may come to mind. Even so, stereotypes are only a portrayal of the individuals within a particular group and might extend to all participants. For example, in the National Football League, it is easy to overlook that, well, almost all players have gone to and often through college.

Still, curious minds want to find out who the smartest teams are. So we decided to look at the teams with the smartest population overall and who these smart guys were.

Comparing the overall Wonderlic scores across the NFL, we were able to determine which 2022 football franchises are the most intelligent and which are the least intelligent. Discover how your team ranks.

The Minnesota Vikings are officially the smartest team in the NFL, with a remarkable average Wonderlic score of 28.7. Academic athletes on the team include:

The team does have two players who did not perform well: Dalvin Cook and Justin Jefferson, who scored 11 and 19, respectively.

The Houston Texans are ranked second overall by Wonderlic. The Texans do have a 28.1 average, thanks to the impressive totals of:

Backup quarterback Kevin Hogan’s 38 points contributed to the overall score. Still, he was released on the third day during training camp.

The Pittsburgh Steelers had a 27.4 average score. Seven players outperformed the team average:

On the other hand, quarterbacks Kenny Pickett with 17 Points, and Mitch Trubisky 25, keep the average low.

The Chicago Bears rank first with an average Wonderlic score of 26.8. Three players on the team scored 30 points or more.

Cornerback Lamar Jackson, on the other hand, scored a 13.

Rounding out all the five smartest NFL brands, we now have Washington Commanders, including an average score of 26.5.

Having brought down the average are running back Antonio Gibson with 12 points, defensive end Chase Young bringing 19 points, and Montez Sweat with 19.

Which Players are The Smartest NFL Athletes?

We’ve contrasted the smartest NFL franchises. So which players lead the way through the most remarkable Wonderlic scores and claim the throne as most intelligent? The following list includes all active NFL players who received the highest scores on this test, regardless of where they attended school.