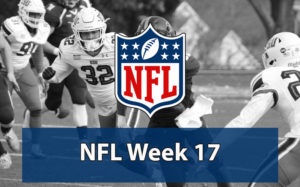 Another excellent week for NFL Week 17 Parlays Picks & Predictions. We won 10.1 units on two parlays, putting us in the black for the season. Welcome back to NFL Week 17 parlay. Now that you’ve received some money from the holidays let’s spend it to make a little more so you can enjoy a Merry Christmas and a Happy New Year.

After reviewing the NFL Week 17 odds at DraftKings Sportsbook, here’s our Let’s Generate Some Cash NFL parlay bet to cash in and see among CasinoWatchPA NFL expert choices and predictions.

Let’s get started in the NFL pick-of-the-day series with my favorite parlay bets for Week 17.

For the first leg of our parlay, I’m going with a playoff play against that terrible Colts team.

Nick Foles is not the starting quarterback in the NFL. The Giants will feast on Indianapolis, especially with a struggling offensive line and Giants pass rush of DL Dexter Lawrence and also DL Kayvon Thibodeaux. Jonathan Taylor is out for the season, and the Colts are just trying to make it to the finish line.

On the other hand, a win for the Giants may secure a playoff spot. Coach Brian Daboll have QB Daniel Jones playing at a first-round level after years of struggle. In addition, RB Saquon Barkley is a top contender for comeback player of the year.

The Giants are standing 11-4 against the spread (ATS) this season, trailing only the Bengals in that category. However, with all the desire, I expect New York to defeat the Colts easily.

QB Tom Brady may be 45 years old and looks it this season, but the comebacks continue. Like last Sunday, he prompted the Buccaneers to a 19-16 overtime winner over the Arizona Cardinals. The game, however, shouldn’t have been that close. QB Trace McSorley led the Cardinals, and the team is currently in complete disarray this season. As a result, the Buccaneers should have been able to cover the 7-point spread with ease. The fact that they didn’t says a lot about Tampa Bay in 2022.

While the Panthers slowed under Matt Rhule, they have emerged since his exit and Christian McCaffrey’s trade to San Francisco. D’Onta Foreman and Chuba Hubbard merged for 290 rushing yards against the Lions last Saturday. Carolina set a franchise record with 570 yards. Coach Steve Wilks has the Panthers on the edge of reaching the playoffs. They will earn a wild-card spot with a win against Tampa Bay as well as a win against the New Orleans Saints in Week 18.

The first step is to defeat the Buccaneers, who seem to be 3-point favorites while having only covered the spread three times this season. I’d also consider taking the Panthers at +135 on the ML, but I’ll go with the safer bet for our purposes.

The Lions won the last meeting between these teams, 31-30, at Soldier Field on November 13. QB Justin Fields has 1,011 rushing yards but still only managed 13 yards against the Buffalo Bills last Saturday in the second-coldest game in Bears history, with a match temperature of 6 and a wind chill of -12. This match will be played at Ford Field, which will be convenient for both the Bears and the Lions on many levels.

Despite a lackluster offensive performance that saw QB Jared Goff contribute to the Lions with 15 rushing yards, Detroit outscored Carolina by 23 points. The Bears’ defense is as bad as the Panthers, and the Lions’ offense might perform even more against them because they are at home. The Bears and Fields will be able to move the ball as well. RB Khalil Herbert has rejoined the team, along with RB David Montgomery. The Bears will score on the ground, while the Lions will score. In this game, I enjoy OVER 52 (-111).

Washington is competing for a playoff spot and must win. However, the team decided to bring back QB Carson Wentz, and that is where the problem started. Taylor Heinicke, the Commanders’ quarterback, was playing well and leading them to victories. However, after some underwhelming performances against the 49ers’ No. 1 defense, coach Ron Rivera made the decision to bench him and stick with Wentz for the remainder of the season. We have seen what Wentz can and cannot do early in the season, and I’m sure the Browns also have.

Since QB Deshaun Watson was restored from suspension, the Browns have struggled to score. They have only scored one offensive touchdown since he took over against Houston. But, with RB Nick Chubb pounding the ball, I expect Cleveland to score another offensive touchdown or two. And with Wentz on the opposing side, this may be sufficient to give the underdog victory. It is a challenging game to play, but if you want to add a fourth leg and double your payout, this is a good wager.