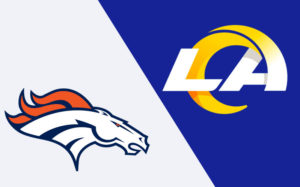 When the NFL schedule makers scheduled this NFL Player Props & Picks: Denver Broncos vs. Los Angeles Rams game for Christmas Day, I’m sure they anticipated it to be much more exciting and carry much higher stakes than it did. However, there is more possibility of finding player prop worth on the market for this game, which I will attempt to do here.

Note that you can find more information about this and every other NFL game this week on CasinoWatchPA. You can also use the player prop search tool to evaluate odds from various sportsbooks for player props in the Broncos vs. Rams game. Let’s get started!

Player Latavius Murray appeared on the practice report suffering from a foot injury this week, so he may not play this week. However, repeating his performance from the previous week will be extremely difficult, even if he does. He ranks 47th in juke rate and 45th in evaded tackles between qualified backs, so that he could have been more spectacular

This matchup is also troublesome. The Rams have kept their elite run defense, ranking first in DVOA, rushing success rate, and yards per carry permit. In addition, Bobby Wagner has emerged as one of the best linebackers throughout the NFL this season, leading the defense to the third-best tackling unit in the league. Given the matchup, I’ll gladly fade Murray, an unimpressive running back.

Player Russell Wilson has had an up-and-down season, with far more downs than ups. However, this game will provide a chance to build momentum into next season. Wilson missed last week’s game due to a concussion, but he should be fine for this one

Wilson had been playing significantly better football before his injury. He has ranked tenth in modified completion rate and sixth in big-time throw rate since Week 8. Having quarterbacks coach Klint Kubiak call the plays rather than Nathaniel Hackett has been highly beneficial

The Rams’ secondary has crumbled, and their dependence on zone defense allows for plenty of easy underneath completions. Since Week 10, they’ve ranked 31st in success rate per dropback, and seven of their last eight opponents have exceeded this mark.

Due to Courtland Sutton’s questionable standing for this game, we have yet to get official lines for Jerry Jeudy. Still, this matchup looks promising for the Broncos wide receiver. He has 60+ receiving yards in five of his most recent seven games, and he possesses the same advantages against the Rams’ secondary that I discussed with Wilson.

Over the last four weeks, Jeudy has a 25% target share and ranks 14th in open rate among 81 qualified wide receivers. He’ll also be in great shape against the Rams’ zone defense, as Jeudy ranks 13th between wide receivers with 10+ targets in yards for every route run against zone coverage.

Player Baker Mayfield’s experience has been intriguing thus far. However, he was kept to 111 passing yards in Green Bay last week due to the frigid weather. While the weather will not be an issue in this game, he will be up against the elite Broncos’ pass defense, and it is challenging to see him having much success.

The Broncos place first in pass defense DVOA and success rate, and second in yards per pass attempted. Whatever your feelings are about Mayfield, he’ll be facing that defense with a shaky offensive line and often second-string pass-catchers. It’s not a good situation for him, and fading his passing yardage is perfectly reasonable.