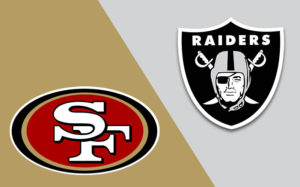 While the NFL works through the Week 16 schedule, we’ve got a few early odds to prepare you for Week 17. Earlier this week was the release of the matchup’s opening odds. CasinoWatchPA with DraftKings Sportsbook will update the re-opened line for 49ers vs. Raiders Week 17 Odds and Details.

In their most recent game, the 49ers annihilated the Washington Commanders 37-20. Last week, the Raiders were crushed 13-10 by the Pittsburgh Steelers. In that game against the Commanders, Brock Purdy had 234 yards on 15-of-22 passing (68.2%), two touchdowns, and an interception. Ray-Ray McCloud rushed for 71 yards and scored once (71.0 yards per carry). George Kittle had 120 yards with six catches (20.0 yards per catch) and two touchdowns in that game.

For the Raiders against the Steelers, Derek Carr finished 16 of 30 passes for 174 yards, one touchdown, and three interceptions. Jacobs rushed for 44 yards on 15 attempts. He had one six-yard catch. Darren Waller has four catches for 58 yards (14.5 yards per catch).

Predictions for the 49ers vs. Raiders Game

The National Football League odds are available at DraftKings Sportsbook. The odds were last updated at 3:31 AM on Tuesday. ET.

Do you want to wager on this NFL game or another? Legally wager online with a trusted partner: DraftKings Sportsbook, CasinoWatchPA’s official sportsbook partner in New Jersey, Pennsylvania, and Michigan. Place your bets now!